Growing up poor isn’t really living. It’s living without. We couldn’t take a hot bath because we couldn’t afford the oil for our furnace. We used a hot plate to heat water, and kerosene heaters to heat the house. Government cheese, peanut butter, and powdered milk was the bulk our diet, along with an occasional syrup sandwich!  I had to do without the trendy clothes that didn’t make me very popular or even liked. Even my Barbies had to do without the fancy dreamhouse and those bitches were used to having everything! I had to make mine out of old books using a Monopoly Board as a roof.

I didn’t really didn’t know what my future would look like, but I knew it wasn’t going to smell like kerosene!

By the time I was 20 years old, it was the mid-90s and I was living with my childhood sweetheart Tony, in a house we were buying. I worked as a manager for an optometrist’s office. He was an assistant manager at Jiffy Lube. I even drove an Audi. ALL my bills were paid. There were no smelly kerosene heaters, plenty of hot water, fast food for dinners every night, and I went on frequent shopping sprees in Chicago! As far as I was concerned, this was living!

Tony and I had our routine. Go to work, come home, eat dinner, watch some TV, maybe go over to a friend to drink a 40-ounce of Old English or some Mad Dog 20/20  but like clockwork, every Friday, at the end of our 50-hour work week, we’d reward ourselves by smoking a big ole’ sticky-icky Swisher Philly Blunt! Pretty soon Tony and I were rewarding ourselves on Monday nights, and then Tuesdays nights, and eventually Wednesdays…and Thursdays.

Getting high was a way to slow life down and relax. The side-effect of smoking weed for me just felt like a heavy weight on my back. I didn’t want to move, I didn’t want to get up or get out and do anything.

One Saturday afternoon, I was sleeping in the bedroom—passed out is more like it—next to a snuffed-out Philly, with all the blinds closed tight to block out the sun. Just a regular Saturday for me. The TV was on in the living room like it usually was. I was stirred awake by Yo! MTV Raps! .A new Outkast video was on.

You need to get up, get out and get something. Don’t let the days of your life pass by.

Wait, what did he just say?

You need to get up, get out and get something. Don’t spend all your time trying to get high!

This was the era when NWA’s Dr. Dre introduced The Chronic. The movie Friday was basically a public service announcement telling you that if you didn’t have a job or shit to do…get high!

You need to get up, get out and get something. How will you make it if you never even try?

You need to get up, get out and get something. Cause you and I got to do for you and I.

Outkast was right out of the hood. They rapped about hustling, pimping, and playing the field. Hell, Outkast was the music I got high to! Since when did they start preaching self-improvement?

I don’t recall ever graduating at all. Sometimes I feel like I’m just a disappointment to ya’ll.

Damn. This song was talking about me.

Back in high school, my friends and I partied every weekend. So when everyone except me had all of the required credits to walk in cap and gown, I had felt like a disappointment. Like the outcast.

Graduation rolled around like roly-poly. Damn, that’s fucked up,

I should’ve listened when my momma told me that, if you play now, you’re gonna suffer later…

I eventually got my diploma, but also I thought about the education I could’ve had at Michiana Community College. I didn’t finish that either, because I wanted to party and bullshit.

I know you know but I’ll just say this to you I, get high, but I don’t get too high.

So what’s the limit supposed to be? That must be why you can’t get your ass out of the bed before 3.

You need to get up, get out, cut that bullshit out, ain’t you sick and tired of having to do without?

Do without?. Without what? I had the house, the car, the man, and the job. What was wrong with where I was?

I know the Lord hadn’t brought me this far so he could drop me off here, did I make myself clear?

Yes, Outkast. You did.

I had reluctantly started going to church after an annual Easter Sunday visit to watch my little niece and nephew sing in the choir.  And now, Outkast was calling me out about the Lord?

The video ended. I turned the volume down.

So, if I had everything I needed, why did it feel like that Outkast video was talking to me? Why was I sitting in the dark feeling so empty? Maybe I was still high. Or not high enough.

A lot of things happened after that day. Instead of lighting blunts, I picked up a pen and began writing poetry and short stories. I started participating in community plays and performing at spoken-word open mics. I even started looking forward to church, because there, I was discovering a spiritual side of myself that gave me a deeper sense of identity and purpose. Tony continued to chase the party and I chased the mic all the way to Indiana University where I graduated with a college degree.

I used to think the worst thing about growing up poor was doing without things. It took that Outkast video to show me I had to get up, get out and find something a lot more important—my dreams.

So, can a song—especially a rap song, really change your life? All I can say is one changed mine. Maybe the message was so strong I couldn’t ignore it. Or, maybe I was just so ready to hear it.

I eyed another snuffed-out blunt in the ashtray. Then I got up and opened the blinds to let the sun shine in.

Watch the spoken word performance and presentation at Lip Service.

Git Up, Git Out video by Outkast 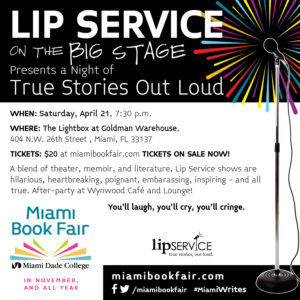