Pin-up beauty; Jazz Cotton Club Dancer;  Las Vegas Lounge Singer; Golden Globe Film Star.  Most importantly, she had that charm that drew the audience’s attention to her whole self.  She even had the personal friends and contacts like Marilyn Monroe, Pearl Bailey, Diahann Carroll, Marilyn Horne, Sammy Davis Jr, Cab Calloway and Duke Ellington.  She had everything anyone could want to be a 1950’s major star – except white skin.  Dorothy Dandredge’s life was one of rags to riches to rags and, posthumously, appreciation.

How Dorothy Grew Up

Her parents split before she was born.  Dorothy grew up on the road with a mom that took her two daughters (the “Wonder Children”) to perform in black churches in Cleveland and throughout the South and even to Hawaii.  Moving to Watts in Los Angeles, Dorothy, at age 8, she played bit parts in films like “Spanky and Our Gang”.

Dorothy married at 19 to a “skirt-chaser” and became pregnant immediately.  Her daughter’s birth had complications and was diagnosed as “mentally retarded” and never matured beyond that of a four-year old.  After several years of taking care of her daughter and after a messy divorce, Dorothy placed her daughter in an institution and went back to acting.  She landed a role in the movie “Tarzan’s Peril” but was disappointed that she was being exploited because of her talents and looks.

She then went back to performing in nightclubs and was very successful although she bemoaned the necessity of having to dress provocatively and acting sexy to the men in the room.  Because this was back in the early 50’s, she found she could stay in hotels but not use their pool or restaurants because of her color.  At one venue, she asked to go to the bathroom and was given a plastic cup. 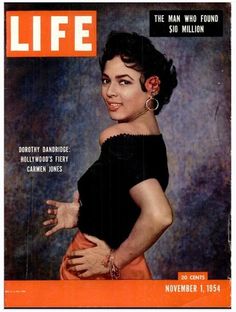 She then returned to Hollywood and was given movie roles playing with Harry Belafonte.  She became famous as the “bronze bombshell” and was featured as a pin-up, on the cover of Hollywood movie magazines, and was the first African American to be featured on the cover of Life magazine.

but never did. along with Sydney Poitier and Sammy Davis Jr. and won a Golden Globe award for her role.

Dorothy married a debonair down-and-outer who caused Dorothy to get rid of her agents and friends.  He beat her which caused the make-up artists difficulty in hiding the bruises.  s oil investment turned out to be a scam and she lost a large sum of money.  Her people handling her money defrauded her of over $150,000 and she owed over $139,000 in back taxes.  All of this led Dorothy to drink.

In 1963, Dorothy filed for bankruptcy selling her home, her two cars, and owing 77 bill collectors almost $128,000.  Her daughter, now 17, was “dropped on her doorstep” because she was unable to pay the private institution.  The daughter would not respond to Dorothy but would play one note on the piano for hours on end, so Dorothy was forced to drop her parental rights and make her a ward of the State.

Dorothy moved into a small apartment but continued to drink to excess and became hopelessly depressed and began taking anti-depressants.

n 1965, at 42 years old, she was found in her apartment, nude in her bathroom with only a blue scarf around her head – dead from an overdose of her anti-depressant.  Her estate consisted of $4,000 of furniture and $2.14 in her bank account.

Posthumously, she received a Star in the Hollywood Walk of Fame and was entered in the Black Film Hall of Fame in 1977.  In 1999 an HBO biography was made of her starring Halle Barry.  This movie won five Emmy awards, Berry won a Golden Globe Award and a Screen Actors Guild Award for her performance.

She experienced sorrow, trials and tribulations all during her rags-to-riches-to-rags life and only later, in a more enlightened and accepting time, was she given the appreciation she deserved from her start.