“Let me have two eight’s and two number fourteen’s.”

Marcus had budgeted twenty dollars a week of his monthly Social Security check to playing the lottery or buying scratch-offs. Normally Marcus would buy ten one-dollar tickets or five two dollars tickets at a time over a two- day period. But for some strange reason this week he had decided to splurge all his budgeted gambling money in one day.
Five dollar tickets were high stakes for Marcus and he had decided to scratch them off at the store instead of taking them home as he would generally do. He bought his tickets at this same store every week so all the people working there knew Marcus as a regular.

“We’ve all got our fingers crossed for you Marcus so good luck,” the clerk said knowing that this was a big deal to Marcus.

“I really need to win and win something big,” Marcus replied.

It was Christmas time and Marcus wanted to buy his wife something special. She had suffered through his shenanigans for a long time and Marcus felt that he owed her. He had been on the fixed Social Security income for five years which barely gave them enough to pay their bills and eat. Marcus wished he had a part-time job to accumulate extra money but was unable to work because of a severe breathing problem from 48 years of smoking.

Marcus had won money before with his one and two-dollar tickets but never more than twenty dollars.

There were fifteen possible winning spots on this first ticket and Marcus scratched each one carefully, inspecting each revealed number with an accountant’s meticulous oversight. This slowed process Marcus took was agonizing to everyone in the store who was paying attention.

“No luck on this first one,” Marcus said.

“Don’t let that get you down Marcus,” the clerk said, “You know it’s a lot like cooking pancakes, the first one never turns out good.”

Marcus set the first ticket aside and started on the second.

The crowd of supporters had grown to eight, all now waiting with great anticipation for the third ticket to be scratched.

Marcus clenched his teeth but then took a deep breath and relaxed his jaw.

“This one is bound to do better – I just have that feeling again,” Marcus exclaimed.

Again Marcus scratched each space with studied anticipation as the crowd around him seemed to sigh with each negative revelation. This third ticket was void of any winning numbers through all fifteen spaces bringing a disgruntled atmosphere to all those now in attendance.

“Well, this is it. My last chance.” Marcus turned to the group and allowed each one to touch ticket number four in hopes for good luck from one of those around him.
An attractive young woman stopped Marcus before he could scratch the first space.

“Would you mind if I rubbed this last ticket for good luck?” she asked.

“Not at all pretty lady. You’re welcome to take it for a spin.”

The young beauty took the card from Marcus’s hand and preceded to rub it very slowly across her perky breasts, down to her private part between her legs, and finally around to her perfectly rounded backside. She then brought the ticket to her lips where she added a voluptuous kiss to the back as all the men were now watching her and only her. She then handed the ticket back to Marcus.

“I believe this one is the one, and you can take that to the bank.” she declared.

Everyone in the room was excited for Marcus as one person in the group confirmed the first space was a $500 winner.

“Don’t stop now Marcus, you got fourteen more spaces to go, and you never know what’s going to happen!” Someone in the group said.

Marcus turned back to the ticket and began scratching the second space which was also a $500 winner.

As Marcus continued on this fourth and last ticket each remaining space through space ten revealed another $500. The last five spaces added $1000 each, bringing the total to $10,000. The crowd cheered each space as it was scratched and Marcus became so excited he felt like he might pee in his pants. He danced around the store like a small child. Everyone congratulated him with a pat on his back. They all suggested that he should thank the lady, but she had already left without anyone noticing.

It was too late in the day to go to the lottery office and get his ticket cashed so he decided to head home to the apartment where he and his wife lived. It was only 6 o’clock in the evening but already dark. Marcus stopped at the bank of mailboxes located in the front area of the apartment complex. As he inserted his key into his mailbox, he felt a blunt object press against his lower back. A voice from behind him said, “don’t turn around and I’ll take that scratch-off ticket, just hand it to me over your shoulder.”

Marcus woke up dazed and confused and not knowing how long he had been unconscious but with anguish managed to struggle to his feet. He felt in his pocket for his winning ticket, but it was not there. Feverishly he searched everywhere on this body but still no ticket. Maybe I was dreaming- but it felt so real, Marcus mused. Did I trip and fall and hit my head he wondered? I’m old and things happen when you get old he thought. He obviously was out of sorts because now suddenly, he did not remember having a $10,000 winning scratch-off ticket. Marcus returned to his apartment where he told his wife he must’ve fallen and knocked himself unconscious. She inquired if he was okay and he replied that he was, that nothing was broken, and that he had a bad headache. His wife nursed him as best she could and they spent their night, as usual, eating a small supper, watching a little TV, and then going to bed around 10 o’clock.

Oddly enough, Marcus never bought another scratch-off ticket. The clerks at the store where he used to purchase his tickets never saw him again and eventually stopped wondering what happened to him.

But This Notebook Makes it Look As if I Do Journal 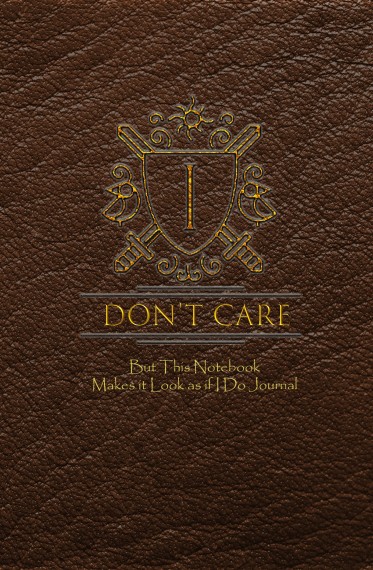 This novelty journal presents a professional design with a decorative crest letter “I” that is incorporated in the title of this journal relaying a humorous message. This 5.5 x 8.5 paperback notebook with lined paper will make a great conversation piece. The graphic design of brown leather paired with a smooth matte finish makes this journal a must have. Use it for your next meeting or gift it to a friend or colleague so when his or her boss asks about it, that person can simply shrug and say, “I got it as a gift!”

The Right Way to Self Publish

“The Right Way to Self Publish is like the GPS. It not only tells you every twist and turn you will encounter on your journey to Self Publication, but it alerts you when you are about to be confronted with them. It even gives you traffic warnings so you know what to avoid.”